Lighting Director, technician and dancer in work in regress (?), Lighting Director for (re)flux and Circonférence He took his first gymnastics class at the age of six. This marked the beginning of sixteen years of intensive practice that played a major role in his education. He discovered dance at the age of nineteen. From 1999 to 2001, he studied at the CNDC (centre national de danse contemporaine) in Angers. At the same time, and in connection with his career as a performer from 2002 to 2008 (Cie Fattoumi-Lamoureux, Cie Christiane Blaise, la Chaudière Intime, Cie Lanabel, Cie Scalène…), he came particularly interested in sound and lighting. In 2008, he took an all-purpose technician (sound, lights, and backstage) course at the Ecole supérieure GRIM EDIF in Lyon. Between 2007 and 2009 he undertook a renovation project to create an artist’s residence (l’atelier du Janin).

sound technician in Circonférence Since 1998, Pascal Thollet is working as a sound technician, at first, at the Confort Moderne, music and contemporary art venue in Poitiers, then as a sound creator and manager with various theater companies, dance and music (JP Berthomier, JM Sillard, H.Buchholz, Cédric Marchal, AL Pigache, Nicolas Hubert). Trough this practice, he is interested in sound recording, in the narration of the sound in the performing arts as well as the issue of sound diffusion devices. As a sound engineer, often accompanied by visual artists, he likes to rub the real, where the word emerges : avec Tomas Bozzato, Fabien Fischer, the N.Barbançon photographer... In parallel with this activity, he is guitar player since the age of 6 years. He created in 1999 the guitar-drums instrumental duet ün-, with poetic and musical readings by Y.Béal poet. He is a member of the band Bleu, song trio. Since 2009, he has been an active volunteer member of the 102 in Grenoble, self-managed venue of experimental and improvised music. He is member of the programming team and deals with bands’ sound system.

sound technician in work in regress (?)

technician in work in regress (?) Born in Grenoble in 1967. His civic service at Prémol theater in Grenoble led him to discover performing arts in 1989. Then followed a first job as assistant manager at the Théâtre de la Renaissance in Oullins : six years of beautiful human and artistic-technical encounters. "Intermittent" since 1995, he tours with severals companies (Adeli Motchan, Pascale Henry, Sébastien Cormier-Cie Amalgame, Atelier Bonnetaille, Golem theater, Dédicaces, La maison d’édition d’idées…). From the machinery to the light, fidding sound, video, DIY accessories, he keeps on working as a stage manager, with exciting and passionate people. He is a founder member of the ABA group, Artistes Bricoleurs Associés (set builder for Circonférence).

sound and light technician in Métaphormose(s) 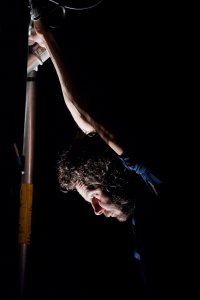 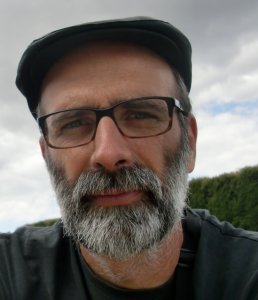