Dancer in (re)flux (alternating with Nicolas Diguet) Sacha discovered classical dance at the age of five, and was later introduced to contemporary dance. He was admitted to the Conservatoire National Supérieur de Danse of Paris at the age of fifteen. Whilst there, he followed the teachings of Susan Alexander, Peter Goss, André Lafonta, Florence Vitrac, and even Christine Gerard. He participated as a dancer in many creations of the Conservatory’s Junior Ballet, with Mourad Merzouki and Christine Bastin, as well as in remakes of repertoire pieces (with choreographies by Merce Cunningham, Angelin Prejlocaj, Julia Marsalo, Sylvain Groud, Carolyn Carlson). He moved to Lyon in 2010 in order to work with the Opéra of Lyon. He joined the Compagnie Litecox in Saint-Etienne in 2011, the Compagnie Philioscope in 2012, and the Compagnie épiderme in 2013.

Dancer in (re)flux After studying at the Suny New Platz in New York, Clint Lutes obtained a BFA in dance from the University of New York. He danced in the United States with, among others, Joy Kellman, Maya Lipsker, Melanie Lane, Johannes Wieland, Ann Carlson, Eun Me Ahn, the Brian Brooks Moving Company and Christophe Winkler. He regularly produced his choreographic work whilst in Germany, where he lived from 2002 to 2010 (at the Tanz in Berlin in August, at the Lucky Trimmer, which he co-founded, or at the theatre of Freiburg). He taught in Berlin for Dock 11 (where he has been in residence since 2005), for the Tanzfabrik, and for Sasha Waltz and Guests as well as in France and abroad. In France, he danced for Yann Lheureux and the Compagnie Scalène. He joined the Compagnie épiderme in 2011 for the production of (re)flux.

Dancer in work in regress (?) Akiko Kajihara started studying modern and classical dance in Tokyo at the age of seven. She went on to study physical education at the Tsukuba University. In 1993, she was admitted to the Laban Centre of London and joined the Transitions Dance Company, where she worked with many choreographers (A. Miller, Y. Snaith, L. Agiss & B. Cowie, Y. Coutts, A. Ahn et B. Cratty). Since 1996, she has danced for many different companies (Cie Pascoli, Cie Christiane Blaise, Cie Lanabel, Cie Thomas Lebrun, Cie Adrien Mondot…) and has been involved in projects in Japan since 2002. She participated in productions by the Compagnie Dance Theatre Ludens, which were performed at the National Theatre of Tokyo, Osaka, as well as in Europe and in the United States (ADF in 2008). In 2008, she took part in a theatre piece directed by Shuji Onodera at the Benisan Pit theatre in Tokyo. At the same time she developed her personal choreographic (her creation Petite Danse was produced in France and in Japan) and pedagogic work, and focused on the association between dance and Japanese calligraphy. She joined the Compagnie épiderme in 2010 for the production work in regress (?).

Dancer in work in regress (?) Born in Barcelona in 1974, Violeta Todo Gonzalez studied classical dance from a very young age. She obtained her degree in contemporary dance and in 1992 started a series of collaborations with numerous dance companies, such as the Compagnie de Mar Gomez and the Compagnie Danat Danza. In 2000, having obtained a scholarship to participate in the X-Group project (a choreographic experiment led by Anne Teresa de Keersmaeker), she moved to Brussels, where she discovered a different dance practice while working with, among others, David Zambrano, Russell Maliphant, Janet Panetta and Meg Stuart. At the same time, she pursued her journey between dance and theater with Maria-Clara Villa-Lobos, Inaki Azpillaga, as well as with Barbara Mavro and Fernando Martin. She moved to France in 2003 and founded, with Valère Bertrand, the Compagnie La Chaudière Intime, where she developed her choreographic work whilst continuing to collaborate with other companies : François Veyrunes (Compagnie 47-49), Anabelle Bonnery (Cie Lanabel), Cie Scalene and Cie Philippe Saire. In 2007, she created the collective Pora Project in Finland with Jyrki Haapala. In 2009, she joined the Dromesko troop for the productions of Arrêtez le monde, je voudrais descendre and Le Quai. She joined the Cie épiderme in 2010 for the production of work in regress (?).

Lighting Director for (re)flux, Lighting Director, technician and dancer in work in regress (?) He took his first gymnastics class at the age of six. This marked the beginning of sixteen years of intensive practice that played a major role in his education. He discovered dance at the age of nineteen. From 1999 to 2001, he studied at the CNDC (centre national de danse contemporaine) in Angers. At the same time, and in connection with his career as a performer from 2002 to 2008 (Cie Fattoumi-Lamoureux, Cie Christiane Blaise, la Chaudière Intime, Cie Lanabel, Cie Scalène…), he came particularly interested in sound and lighting. In 2008, he took an all-purpose technician (sound, lights, and backstage) course at the École Supérieure GRIM EDIF in Lyon. Between 2007 and 2009 he undertook a renovation project to create an artist’s residence (l’atelier du Janin). 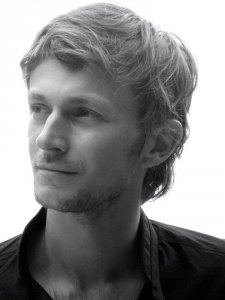 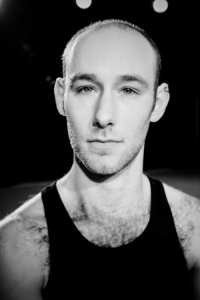 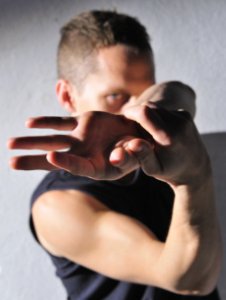 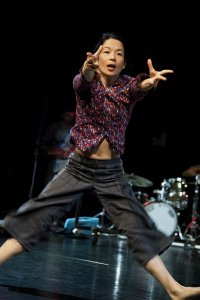 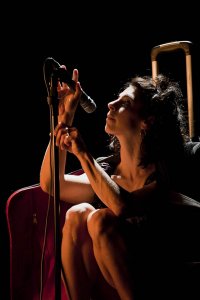 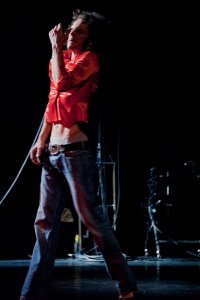